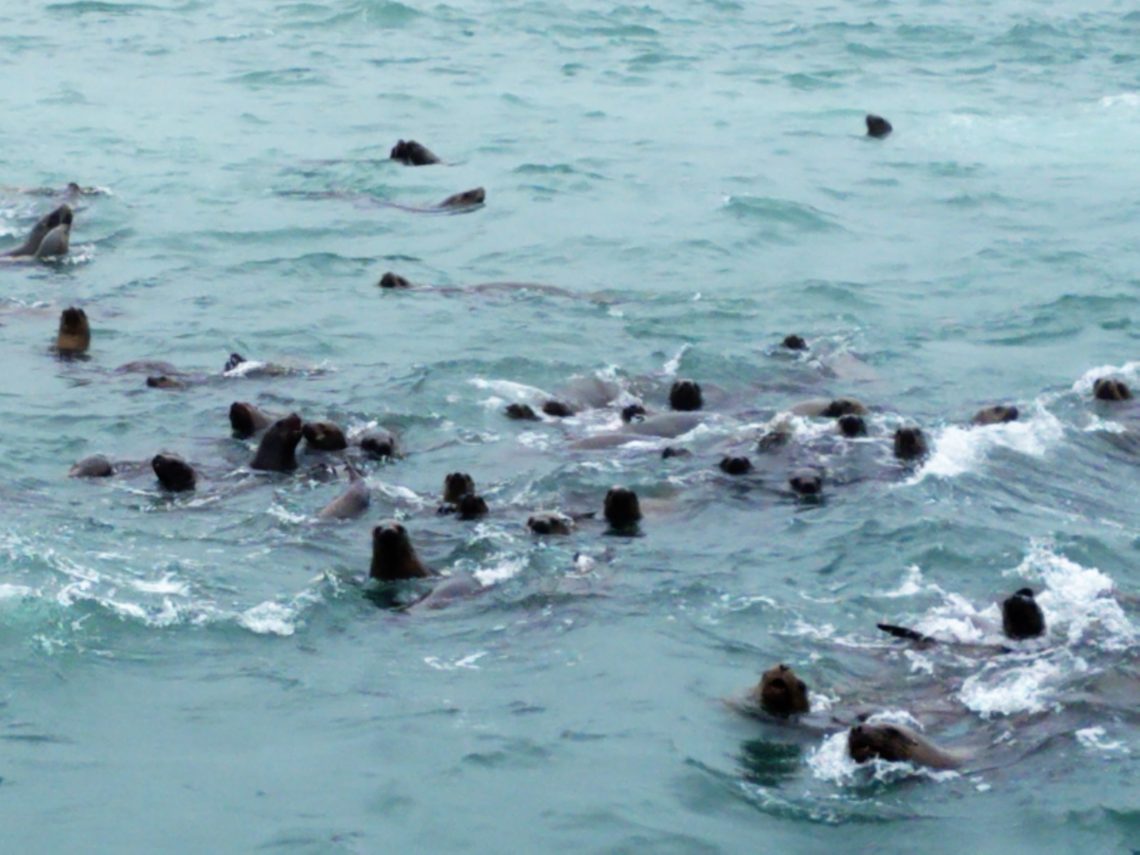 Our trip to Lima was focused on the top Latin America restaurants. Every lunch and dinner time slot was reserved during our 10-day trip to Lima which didn’t leave us much time to explore. Before we left, I scheduled one day to do what I wanted; swim with wild sea lions. I honestly didn’t think this wildlife encounter was going to happen.

Disclosure: Some of the links below are affiliate links, meaning, at no additional cost to you, we will earn a small commission if you click through and make a purchase.

Lima was foggy and gray the entire time we were there. When we walked down to the coast, visibility was poor, and the waves looked ominous. On the 6th day of our trip,  I left the hotel for the Palomino Islands Cruise and Swimming With Sea Lions Experience from Lima on Viator.com not feeling overly excited. I was mostly disappointed that I might not be able to do the one thing I scheduled for myself. But then I remembered sea lions don’t care about the weather.

The driver picked me up at 9am just like the Whatsapp text said. We picked up another couple at the JW Marriott and headed 30 minutes outside of Lima to a small town called Callao. I wish I had seen more information about this because there was a beautiful fort we drove by but did not have time to stop. Callao is a major port for international container ships.

We checked in right in front of the Universatario de Regatta. We had about 20 minutes to wander before all the guests were supposed to arrive.  My travel partners headed for the beach and I snuck into the boathouse. I was a rower in college so getting a chance to see boats and oars again was a major highlight for me.

The view from the second-floor dining area could have been breathtaking if the fog wasn’t obscuring what was out there. The fog gave it a dreamy and sleepy look among the sailboats and sculls on the water.

Afterwards, I wandered down to the dark and gloomy beach and took a picture of a statue commemorating the War of the Pacific battle between Chile and Peru in 1881.

Back at the meeting point, our numbers swelled to 26. We walked to the end of the dock where we watched a small skiff maneuver its way through the boats to us. Only 8-10 people at a time could fit in the small skiff, and we sat low in the water. Cruising through the maze of anchored boats, we arrived at our tour boat. The back of the boat had covered benches lining the edges with a large seating area in the middle.  More seats were up front on the bow, but those were not covered.

The little skiff made 4 trips to acquire all the people. I’m not good at the waiting game. The captain offered us all Dramamine and water. I don’t usually get seasick, but today did not look like a good day to test that. Two people out of 14 in the back did not take the pill. They were laid out for most of the trip.

At almost 11 am, the boat revved the engine and we headed out to open water. We were in a no wake zone for quite a while, and once we could pick up speed, there still wasn’t anything to see because the fog was so thick.

We headed for the big island San Lorenzo and got a bit of history on the way out. The island is used as the Peruvian President’s weekend getaway. It has 3 housing structures on an otherwise barren rock. 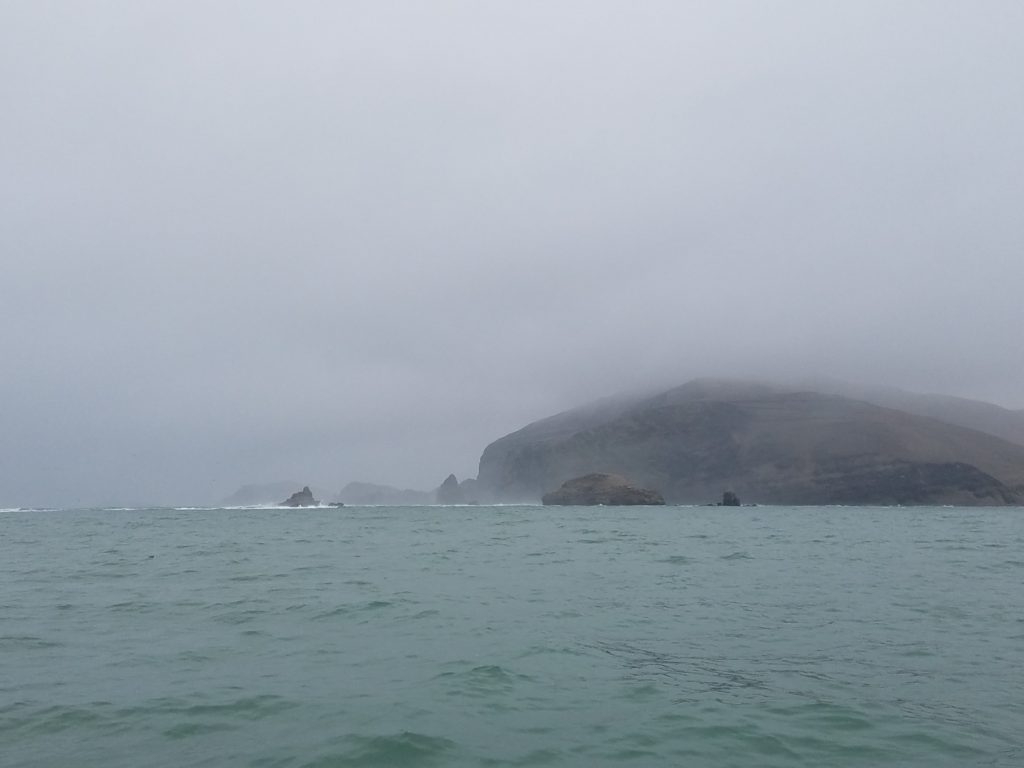 The next island, El Fronton, had a prison where a major riot broke out between the guards and inmates in 1986. The national guard and navy had to be called out to subdue the violence. Machine gun bullet holes swiss cheesed the place. Most of the inmates were killed if not during than after. The island’s nickname is “Island of Hell”.

After passing the prison island which looks like a sleeping man, we again headed out to open water to Palomino Island where the 5000-member sea lion colony reside. The water was rough crossing between the islands of which we could not see again until we were about 300 feet away.  A few random sea lions popped their heads up near the boat to see what we were. We were getting close.

The boat stayed about 100-150 feet from the rocks and slowly cruised around one face of the rock. I guess the captain was maneuvering the boat into the calmest water though the surge was at least 20 feet high. The sea lions played in groups around the boat, some kissing, some rolling, mostly popping their heads up to look at the funny creatures looking down on them.

Time to Jump in!

This was the Pacific Ocean and it was cold and windy. The tour guide announced that now was the time to swim with the sea lions. The wetsuits were all in a pile on the floor of the cabin. I was not feeling very adventurous, thinking about being cold and wet on the way back to shore. The American couple were the first to change into their wetsuits. Then the Columbian couple, and about 8 Peruvians. I came all this way, and this was the one thing I set aside for me. I had swum with sea lions in Mexico, so it wasn’t a once in a lifetime experience really for me, but I also knew if I made it this far and didn’t do it, I’d regret it. So, I suited up.

Out of all the suits on the floor which looked in pretty good condition, I got the one that had holes in it. This was not going to feel good in the frigid water. Up on deck, they put a blue life jacket on all of us going into the water. I strapped on my GoPro and stepped down to the platform ready to jump in.

But then the girl in front of me who just jumped in started freaking out. She was grabbing the boat and I didn’t know if she was getting out or not. People were shouting above me “Jump!” “Just go!” and through the chaos other swimmers were jumping in. The American couple were already by the sea lions. It was time to close my eyes, grab my life jacket and jump.

Holy cow the water is cold!

Swimming with the Sea Lions

It took a few seconds to get my breath, and then I swam awkwardly towards the sea lions. They were all in a big group (known as a raft) curiously looking at the GoPros on sticks near their faces. Some were brave enough to bump them, and one juvenile proudly displayed some aggressive splashing towards two of the swimmers.

The sea lions for the most part stayed about 6-10 feet away, moving with the rolling of the ocean. Some wanted to see what these strange creatures were like and bumped our feet either under the water or at the surface. 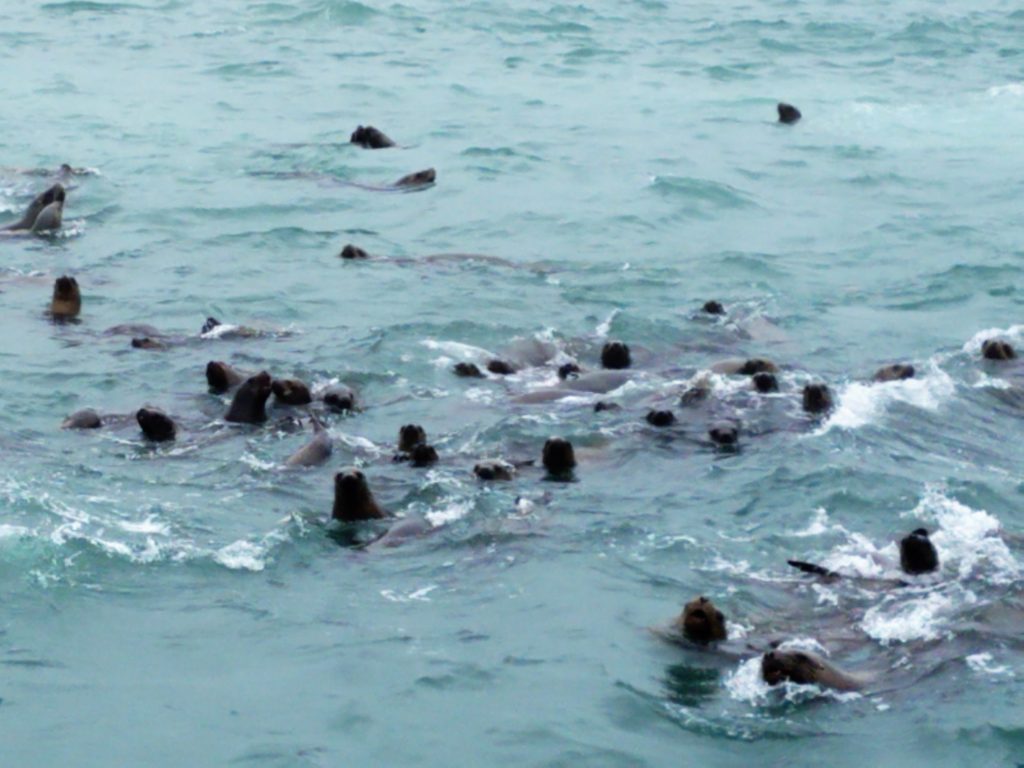 Animal Behavior Tip: Reaching out to try to touch sea lions (or any animal) can be considered aggression. You do not want to get bit by a sea lion. It’s best just to float in one place and let them come to you.

I wanted to get close enough to see their pupils yet respect their space. They did not give us masks or fins which I can understand because there was only one scuba diving master to keep an eye on us all, but we were missing out on one of the most beautiful aspects of the sea lion; their effortless ballet of swimming underwater. I was a bit ticked off at this, but it was obvious many of the people were very uncomfortable in the water even with the extra floating assistance of the wetsuit and life jacket.  It didn’t matter much anyway. The video footage I took underwater showed it was too churned up to really see anything.

We stayed in the water for about 30 minutes. The surge played with our positions and it was entertaining to watch the sea lions use the surge to either get up on the rock or fall back into the water. 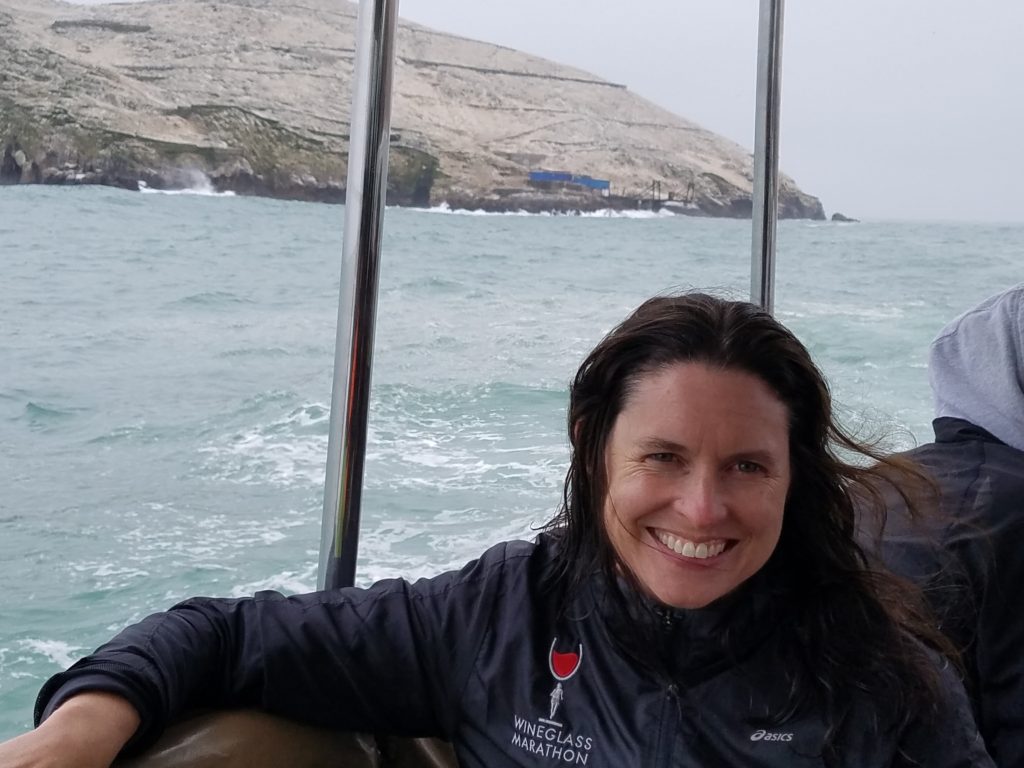 Other Wildlife to See

On the way back to the mainland we saw Humboldt penguins on the rocky islands, blue footed boobies flying, lots of cormorants and even the Inca tern with its handlebar mustache of white feathers streaming in the wind. 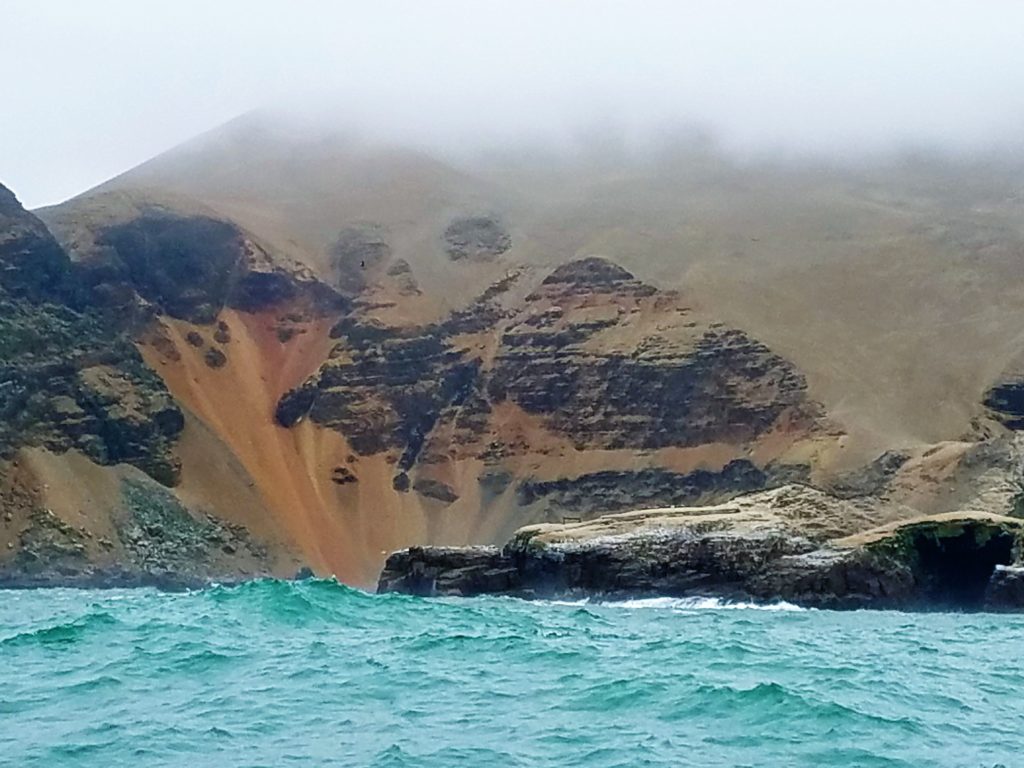 A regatta of sailboats raced us back to shore which was a welcome distraction to the cold. 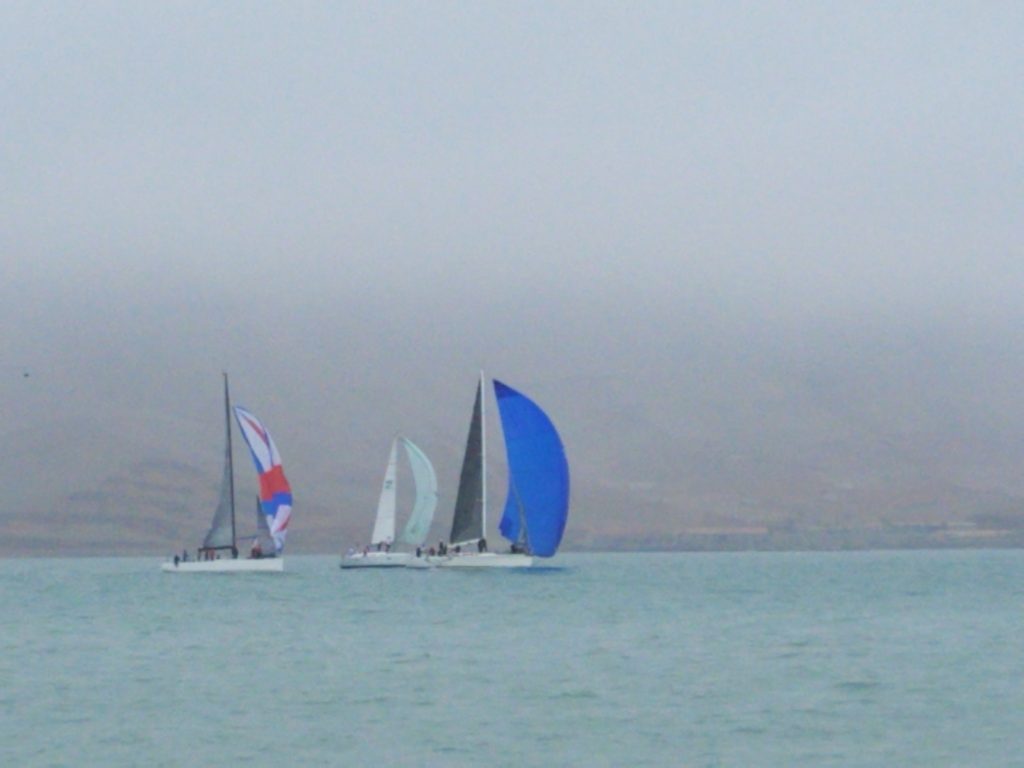 As a finale, seagulls and pelicans followed us back through the maze of boats catching the bits of fish and crackers the crew threw in the air. I know seagulls are just rats with wings, but it’s always exciting to see them fly so close. The pelicans were my favorites.

For this trip, I did not bring my large camera with the telephoto lens. Usually I do, but I didn’t know if the weather was going to get nastier. If you have great weather, definitely bring the nicer camera. The Inca terns are small, fast flyers and adorable, and it’s the only way to capture their image.

Whether its sunny or foggy I recommend these items to make your trip more enjoyable:

Sunscreen (UV rays are still present even if its not sunny)

Mask (they don’t give you one)

waterproof shoes or all terrain sandals

This tour is offered year round. The locals say the water is too cold for sharks and killer whales. I don’t really agree with this so I’m doing some research. Whether this is true or not, local fisherman have not seen either animal around Palomino Island.

January through May seem to be the best months to travel to Lima for clear skies. June through September are cold winter months and it can be foggy. October through December you may still experience fog and possibly spring rain but the temperatures are warmer.

Overall, the crew was great with education presentations throughout the cruise, and they gave us crackers, pretzels and ceviche on the way back. They had no control over the weather (I went in mid-September), but it was still a fantastic experience. 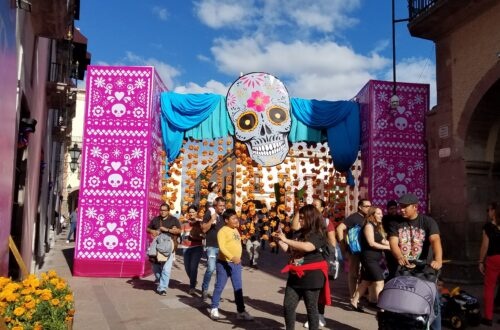 Celebrate Life During the Day of the Dead 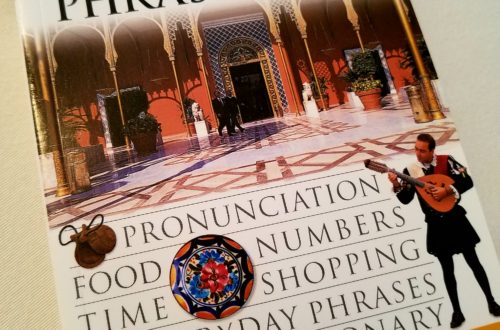 Learning Every Day Spanish in Mexico 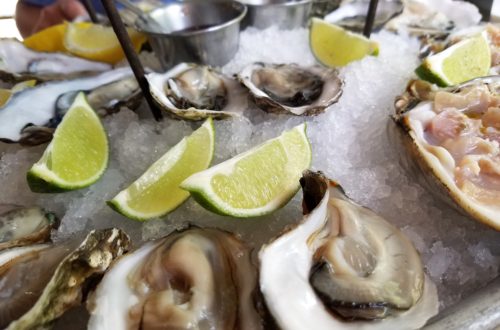